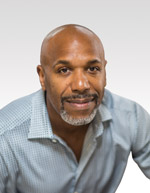 Glenn Singleton hails from Baltimore, Maryland. A product of public elementary and independent secondary school, Singleton earned his bachelor’s degree from the University of Pennsylvania and his master’s degree from the Graduate School of Education at Stanford University. Singleton began his career as an Ivy League admissions director. In 1992, he founded Pacific Educational Group, Inc. (PEG) to support families in their transitions within and between K–12 and higher education. His company rapidly grew into a vehicle for addressing systemic educational inequity by providing a framework, guidance, and support to K–12 systems and institutions of higher education focused on meeting the needs of under-served students of color.

Singleton and his associates at PEG design and deliver individualized, comprehensive

professional development for educators in the form of training, coaching, and consulting.

Working at all levels, from beginning teachers to superintendents at local, state, and national

levels, PEG helps educators focus on heightening their awareness of institutional racism and

administrators, teachers, students, parents, and community stakeholders identify and examine the intersection of race and schooling. The Beyond Diversity seminar is the foundation for the PEG Systemic Racial Equity Framework and its theory of transformation, which focuses on leadership development, teacher action-research, and family/community empowerment. Today, participants around the world use Singleton’s COURAGEOUS CONVERSATION Agreements, Conditions and Compass, introduced to them in Beyond Diversity, as they strive to usher in

Over its 20-year history, PEG’s scope of work has expanded to include online professional

Public Relations Association. He has hosted and produced educational programs for television

and has written numerous articles on the topics of equity, institutional racism, leadership, and

staff development. He is the author of Courageous Conversations About Race: A Field Guide for Achieving Racial Equity in Schools, which earned “Book of the Year” recognition from both the National Staff Development Council and ForeWord Magazine in 2006, and the newly released More Courageous Conversations About Race. In 2009, Singleton was elected to serve as a commissioner on the California State Board of Education African American Commission.