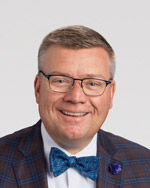 Dr. Bill Ziegler is a high school principal in Pennsylvania. He was recently honored as the 2016 Pennsylvania Principal of the Year, the 2015 National Association of Secondary School Principals Digital Award Winner, and was selected to serve on the United States team of School Leaders to the Great Leaders Summit in China.  Dr. Ziegler has over 24 years of service in public education where he has served as a school leader for 20 years. Bill was recently selected to serve on the team to rewrite the NASSP/NAESP Breaking Ranks publications for school leaders.

He has served as a high school social studies teacher, high school assistant principal, middle school principal, and he currently serves as a high school principal. Bill also earned Apple Teacher certification and was recently selected to participate in an Apple Research Study for School Leaders.  Bill is honored to be part of the Corwin Consulting Team that provides high quality professional development to school leaders.  Dr. Ziegler also serves as an adjunct professor at Temple University in their Masters of Education department.  Bill is very active in his state; he served as the President of the Pennsylvania Principals Association in 2014 and 2016 and was honored to be selected as Treasurer and Southeast Regional Representative for the same association.  Dr. Ziegler presents regularly around the world on School Leadership.  He has presented at national conferences such as the National Association of Secondary School Principals, Association of Curriculum & Supervision Development, International Society for Technology in Education, and many more.  Bill spoke on Capitol Hill to lobby for better ERate coverage for schools throughout the United States.

Bill is the owner of Chase Learning (https://chaselearning.org), a private educational consulting firm designed to provide high quality and engaging professional development to strengthen school leaders throughout the United States.  Personally, Bill is married to his beautiful wife, Kim and they have two high school aged children.  Bill can often be found fly fishing in the streams of PA, cheering on his favorite Philly sports teams, or playing his saxophone.