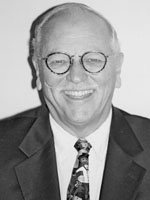 John Blaydes is one of the nation foremost experts in the field of school administration.

He is an inspirational leader, author, motivational speaker, seminar leader and educational consultant. In recognition of his innovative leadership John has been honored with both the National Distinguished School Principal Award and the prestigious Milken Foundation National Educator Award. John also received the Kennedy Center for the Performing Arts National School Administrator Award for his dedication to arts education and the California's School Principal Leadership Award from the California Librarians Association for his outstanding media center program.

In his role as inspirational leader he has promoted a culture of excellence at his schools. His school was twice selected as a California Distinguished School and has been honored with multiple awards for his outstanding visual and performing arts, media center and math programs. Staff awards include the National School Nurse of the Year, the Presidential Award for Excellence in Mathematics Teaching, the California Media Center Teacher of the Year, the Sallie Mae First Year Teacher Award, the Orange County Teacher of the Year and another recipient of the Milken Foundation National Educator Award.