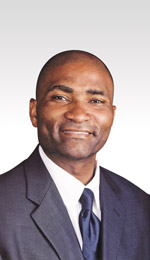 Dr. Salome Thomas-EL has been a teacher and principal in Philadelphia, PA and Wilmington, DE since 1987. He is currently the Head of School at Thomas Edison Public Charter School in Wilmington, DE. Thomas-EL received national acclaim as a teacher and chess coach at Vaux Middle School, where his students have gone on to win world recognition as Eight-Time National Chess Champions. Principal EL was a regular contributor on “The Dr. Oz Show” and the author of the best-selling books, I Choose to Stay and The Immortality of Influence (Foreword by Will Smith). The Walt Disney Company optioned the movie rights to I Choose to Stay. Thomas-EL speaks to groups across the country and frequently appears on CSPAN, CNN, and NPR Radio. He has received the Marcus A. Foster Award as the outstanding School District Administrator in Philadelphia and the University of Pennsylvania’s distinguished Martin Luther King Award. Reader’s Digest Magazine recognized Principal EL as an “Inspiring American Icon” and he has appeared on Oprah Radio!
Passionate Leadership