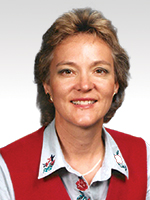 Linda E. Reksten has been an educator for 25 years: 23 years in the public school system and two years as a college professor at Point Loma Nazarene University. Reksten began her public teaching career in the Burbank Unified School District in 1982 as a middle school science teacher and high school chemistry teacher. During the summers, she taught elementary science for gifted students in Grades 4 and 5. In 1986, she became principal of Disney Elementary School.

During Reksten’s 17 years as principal, Disney Elementary became a Title 1 school and the most ethnically diverse school in the Burbank Unified School District, with 12 languages and 44 percent of the student population speaking only limited English. Disney became a California Distinguished School in 1997 largely due to the school’s technology program. As a result of her leadership and a dedicated, hard-working staff, Disney students’ Academic Performance Index (API) grew from 603 to 790 in three years, ranking the third highest-performing school in the Burbank Unified School District. Because of this success with students, Reksten and her staff were recognized by President Bush on June 10, 2003 in The Rose Garden at the first anniversary of the No Child Left Behind Act.

After serving two years as Professor of Education at Point Loma Nazarene University, Reksten transitioned back into public education to become the director of assessment and evaluation for Mountain View School District in El Monte, where she was responsible for assessment and technology. As of August 2007, she was promoted to assistant superintendent of educational services for the Mountain View School District, assisting 12 schools in improving their student achievement.

Reksten is the author of Using Technology to Increase Student Learning (Corwin Press 2000). A native of Montana, she graduated from Montana State University, Billings, in 1973 with a secondary education degree in biology and chemistry. Immediately after graduating, she went on to earn a master’s degree in Christian education from George Fox University in 1976 and served four years as a director of Christian education. While still a teacher, she began her second master’s degree at Point Loma Nazarene University, where she graduated in curriculum and administration during the summer of 1985. She completed her doctoral studies at UCLA in teaching studies in June 1995 while she was a principal.