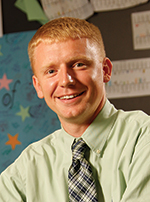 Josh Stumpenhorst is a junior high history and English teacher in suburban Chicago, IL where he lives with his wife and two sons. In addition to teaching, he is an athletic director, team leader, computer club advisor, track coach, basketball coach, and serves on numerous curriculum and technology committees at the school and district level. He holds a Master’s Degree in curriculum and instruction as well as a National Boards Certification in early adolescence social science.  Beyond traditional professional development, Josh is an active member of the twitter (@stumpteacher) and blogging community as well as a respected presenter. He has presented at technology conferences such as the International Society of Technology Conference, Illinois Computer Educators Conference, Midwest Education Technology Conference and the Illinois Education Technology Conference. Josh has also presented on a variety of education topics at the Illinois Reading Conference, Reform Symposium, a variety of EdCamps as well as numerous other presentations to local and regional school districts and colleges.

His work was recognized by the International Society of Technology Educators as they named Josh a member of their “Emerging Leaders Class of 2011”. Josh has also been recognized as the Illinois Computer Educators as “Educator of the Year” for 2012 and he is the 2012 Illinois Teacher of the Year. In addition, he was recognized with a California Casualty Teaching Excellence Award by the National Education Association and was the Illinois Education Association’s Excellence in Teaching Award winner in 2012. Josh was named a Pearson Foundation Global Learning Fellow in 2013 and awarded the Outstand Alumni Award from North Central College that same year.

Stumpenhorst is an active blogger at Stump the Teacher and his work there has received recognition through numerous EduBlog Awards nominations. In addition, you can find written contributions of his at SmartBrief Education and the EdReach Community where he is the lead on the Disruptor Channel. Josh can also be heard as a regular guest commentator on the BAM Radio Network and has appeared as a guest on Huffington Post Live. As a connected member of the social media community, Josh regularly consults at education conferences and professional development activities as he is seen as a prolific connected educator.