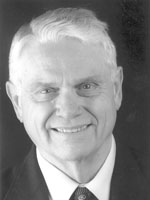 ., is the Eminent Professor of Educational Reform at Old Dominion University in Norfolk Virginia. He received his A.B. (with Distinction) in history, with honors in Humanities, from Stanford University in Palo Alto, California. He continued at Stanford and completed both his M.A. and his Ed.D. in Education.

Dwight is also heavily involved in global concerns and for more than 10 years served as the International Technical Advisor for the United Nations Development Program in China as well as a consultant to the Department of Defense Dependent Schools in Germany. He also serves or has served as a consultant for schools and universities in Zimbabwe, Botswana, Zambia, India, South Africa, Israel, Uganda, Malawi and Greece.

He is the co-author (with his son, Douglas B. Allen, Ph.D.) of a companion volume to Making the 2 + 2 Performance Appraisal Connection that is being developed based upon the application of the 2 +2 model in the corporate sector. He is also the co-author of AMERICAN EDUCATION: The 100 Billion Dollar Challenge, (with Bill Cosby, Ph.D.) which was "ePublished" by Time Warner in 2000, and was named one of six non-fiction finalists in the International eBook Awards. In 2002, Dwight was named University Teacher of the Year by the State Council for Higher Education in Virginia 1n 2001, and the University of Massachusetts, Amherst, has honored him by establishing the Dwight W. Allen professorship of Educational Policy and Reform, also in 2001.

Dwight is known as a leading proponent of reformed educational systems for the future, and has written literally scores of influential papers and magazine articles on all aspects of the topic. He is an in-demand speaker and has delivered hundreds of lectures on national and international platforms. He has been the recipient of numerous grants for studies of educational systems.