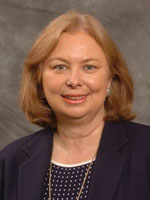 Betty J. Alford is a Professor and Chair of the Department of Secondary Education and Educational Leadership at Stephen F. Austin State University (SFASU) in Nacogdoches, Texas, in addition to serving as doctoral program coordinator and teaching in both the principal preparation and doctoral programs at the university. Since 1999, she has served as lead writer for federal and state educational partnership grants totaling over ten million dollars. She has served as project director of the East Texas Gaining Early Awareness and Readiness for Undergraduate Programs (GEAR UP) grant, as principal investigator for a second GEAR UP grant, as co-principal investigator for a College and Career Readiness grant, as project director for a School Leadership grant, and as project director for the Project English Language Acquisition Center of Excellence (ENLACE). In 2008, she received the SFASU Foundation Faculty Achievement Award for Research. Previous awards include the department’s Teaching Excellence Award and the SFASU Chapter Phi Delta Kappa Educator of the Year award. From 2004 to 2007, she served as a member of the Board for the National Council of Professors of Educational Administration and serves as editor of the NCPEA Yearbook for 2011. She holds a bachelor’s degree in education from The University of Texas at Austin, a master’s degree in educational supervision and counseling with certification as a school principal from SFASU. Her doctoral degree in Educational Administration was from The University of Texas in Austin. Her experiences in public school include service as a school principal, a school counselor, and an elementary, middle, and high school teacher.
Leading Academic Achievement for English Language Learners