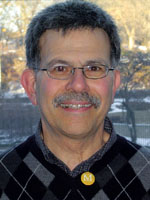 Abby Barry Bergman has been involved in the field of education for over 40 years, in both private and public educational settings. Initially a kindergarten teacher, he has taught at the university level and has filled a variety of positions in school administration. Since 2002, he has served as the Regional Science Coordinator for Putnam/Northern Westchester BOCES, a service organization for a consortium of school districts in New York State. Previously, he was principal of the Ralph S. Maugham School in Tenafly, New Jersey, for over 20 years—an elementary school in a nationally reputed “lighthouse” school district.

Having received his bachelor of arts degree from Hunter College of the City University of New York, he went on to engage in graduate study, earning the master of arts, master of education, and doctor of education degrees from Teachers College, Columbia University. In 1996, Bergman received the Administrative Excellence Award presented by the Bergen County Administrators Association.

Bergman has also served as an independent consultant in educational product development and evaluation. He has authored books in the field of science education and written several professional articles, pamphlets, and curriculum guides.

The Survival Kit for the Elementary School Principal